Due in part to a maturing customer base and the growing prevalence of the indie game scene, the video game industry has bore witness to a marked increase in the popularity of narrative based games over the past decade. This gradual paradigm shift towards designing immersive story driven experiences has not only generated some of the most critically acclaimed titles ever produced by the industry, but has also garnered a number of opinions concerning the possible limitations of the medium itself. The notion of narrative experiences utilizing the inherently ludic elements of a video game in order to facilitate characterization and storytelling has effectively highlighted what role interactivity plays on a traditional narrative structure while simultaneously accenting the pitfalls of this bilateral approach. One such issue arises when the story and environment of a game seem incongruous to the gameplay, breaking immersion and overall enjoyment to a degree. This seaming disconnect between the actions performed by the player during gameplay sequences and the intra-diegetic narrative is referred to as “ludonarrative dissonance”, a term first coined by Clint Hocking with respect to a conflict between the ludic and narrative elements he observed in Bioshock (2007, Irrational Games). By applying this theory, one can probe the extent to which ludonarrative dissonance pushes the boundaries of lusory attitude, and to what extent it factors into overall enjoyment. Even though ludonarrative dissonance has existed since the inception of the medium, a large number of video games have become increasingly cinematic and narratively focused to such an extent that, in some cases, the main selling point of the game is its story. In cases such as these, ludonarrative dissonance, an inoculate concept in most games, is a much larger hindrance to overall enjoyment and thus must be culled. In order to elucidate how these causative factors of dissonance can be avoided, this paper presents a comparative case study on two game series in which the narrative is the main focus; one that mitigates dissonance by effectively interlacing the ludic and narrative elements of its story, The Last of Us (2013, Naughty Dog), and the series whose narrative disconnects are responsible for the very formulation of this concept, Bioshock.

Set in a quasi-Randian utopia, Bioshock is a critique on the objectivist philosophy of rational self-interest. In brief, Bioshock thrusts the player into the underwater city of ‘Rapture’, a society built upon Radian ideals, and tasks them with escaping the city alive. The gameplay elements are centered around the accumulation of power in ways meant to make the player feel uncomfortable or morally conflicted, and are designed in order to place the player in situations in which “it is best if I do what is best for me without consideration for others” (Hocking 2007). These ludic mechanics are presented in such a way that  the player is forced to align themselves, or at the very least, ponder the benefits of the objectivist philosophy in order most effectively navigate the gameplay segments. A good example of this mechanic is expressed through the ‘little sister’ characters depicted in Figure 1. When encountering these defenseless characters the player can opt to align themselves with the objectivist philosophy and ‘harvest’ them in order to gain a large amount of power or experience, making surviving the game easier. Conversely, the player can choose to act selflessly and ‘rescue’ them for a lesser amount of experience. While the interactive aspects of the game work in service to the intended theme, the internal logic is not conserved with respect to the narrative constraints the game imposes against the player. In order to progress through the narrative, and thus the game itself, the player must act in an altruistic fashion toward another character named Atlas, regardless of how the player chooses to progress through the ludic portions of the game. By allowing the player to choose a objectivist play-style while simultaneously forcing the player to assist Atlas in order to progress through the narrative hinders the narrative and ludic cohesion of players who choose this objectivist play-style. This effectively creates a cognitive disconnect between the adopted Randian play-style and the necessity to act outside of the player’s rational self-interest to advance the narrative.

The reason that these direct conflicts between the narrative and ludic elements are present in Bioshock but absent from The Last of Us ultimately stems from the degree to which the player can project themselves onto the protagonist and to what extent the choices of the player can effect the narrative. The protagonist of the original Bioshock is a nearly voiceless and effectively nameless cipher for the player. This complete lack of characterization allows the player to assume the role of the protagonist, but this design choice also entails relinquishing agency of the narrative over to the player and should be taken into account when attempting to design a narrative conducive to varying play-styles. By allowing the player to make disparate choices with respect to the ludic elements of the game while simultaneously forcing the player down a singular narrative path, Bioshock generates a disconnect for players adhering to a specific play-style as explained previously and exhibited by Figure 1. Conversely, the player character of The Last of Us, Joel, is given his own agency and exhibits such well-defined characteristics that it can be predicted what course he would take when confronted with a narrative decision. In the game, the player assumes control of Joel, a world weary smuggler, and is tasked with surviving in a virulent post-apocalyptic environment rife with infected “zombie” like creatures as well as fellow, often dangerous, human travelers. The main arch of the story focuses on the adventures of Joel and the dynamic relationship between him and his traveling companion Elle, a young girl with a unique immunity to the infection. Unlike Bioshock, The Last of Us establishes that the player controlled character has his own way of navigating this environment; the game restricts the player’s control over the ludic elements of “what” Joel does and instead only allows the player to effect the “how” and “to what extent” of Joel’s interactions. Even though the story itself is as linear as the narrative presented in Bioshock, the design decision to subtly limit the impact of these ludic choices and the creation of such a well-defined central character, allows the game to circumvent the ludonarrative dissonance that manages to undermine the integrity of character in Bioshock. For these reasons, the narrative decisions in The Last of Us never feel unnatural or out of character, namely because the choices are not being made by the player, they are being made by Joel, and thus never vary from the original creative intent for the character. 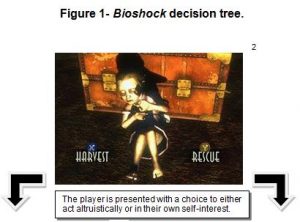 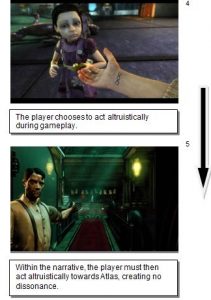 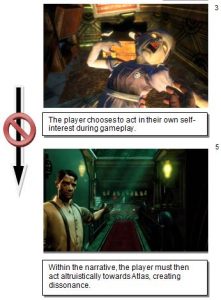 This seemingly simple change effectively shifts the conversation away from a question of “what would I do,” in the case of Bioshock, to “what would Joel do” allowing the story to progress in a way that may not align with the will of the player but causes no cognitive disconnect because the game makes clear that the player has no reasonable expectation of narrative control.

A good example of how The Last of Us maintains consistency between its ludic and narrative design is exhibited in the penultimate act of the game in which the character of Elle is about to be fatally operated upon in order to extract her immunity to the infection. The character is presented with the choice to either save the life of Elle or let her die in order to secure the viability of the entire human race (Figure 2). The game leaves players to ponder the outcome of their weighty decision as they make their way up to the OR room housing Elle, but it is not until they reach their destination that they realize they were only provided with the temporary illusion of choice. Ultimately, the player is reminded that they are not playing as themselves, in the form of a cipher akin to Bioshock, but rather that they are playing as Joel, and that the only actor with agency upon which to act is Joel. When the narrative decision to save Elle is forced upon the player it has no disconnect because the decision, while it may not align with the decision the player would have made, is not out of line for Joel whose characterization and relationship with Elle has been established through ~30 hours of preceding gameplay. In the end, the only decision given to the player is the degree of violence Joel uses to save Elle, and based upon the player’s previous style of play they may choose to kill all or none of the medical staff, creating no ludonarrative dissonance while simultaneously being unrestrictive towards the player’s ludic decisions. 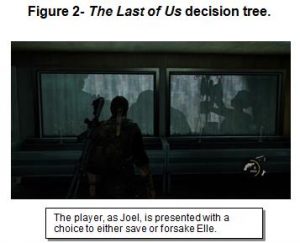 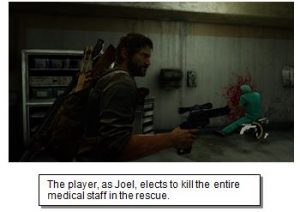 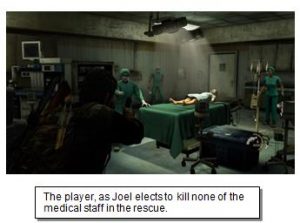 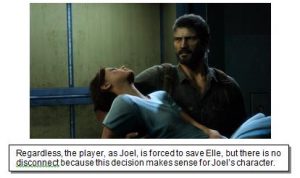 The relative ludonarrative successes and failures of these two games beg the question, “is giving the player little to no control over the ludic or narrative elements of gameplay the solution to minimizing or eliminating the effects of ludonarrative dissonance?” This conclusion is as cynical as it is unsubstantiated, as the ludic elements in even the most restrictive of games can still form a disconnect if they are not presented as reasonable extensions of the narrative or if they do not seem appropriate for the fiction of the game world. These exact issues are clearly exhibited by the follow up to Bioshock, Bioshock Infinite (2013 Irrational Games). In the case of Bioshock Infinite, having tightened the narrative and ludic elements of the prior installment, the ludonarrative dissonance does not stem from a gap in narrative logic but rather from gameplay that is jarringly out of place with respect to the overarching story.

Set in a clandestine idealized version of America, Bioshock Infinite attempts to broach many high concept ideas including American exceptionalism, historicism, and the multiverse theory, none of which lend themselves to the violent FPS gameplay format. The juxtaposition of extreme violence within the pristine and seemingly genteel world of Infinite does little in support of the narrative and instead seems to only exist because violence is relatively safe from a marketing perspective. In a pre-release interview, the then creative director of Irrational Game’s, Ken Levine, acknowledged the existence of this 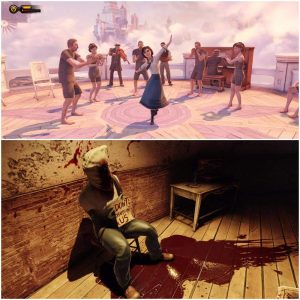 disconnect himself when by remarking, “You start to see some dissonance around the edges of the narrative in an FPS because you have this very over the top experience and then you have a more grounded sort of narrative experience” (Crecente 2013). To again use The Last of Us as a benchmark, the violence in that game, while gruesome, manages not to be gratuitous in that it is justified by the desperate nature of the game environment. Unlike the violence within Bioshock Infinite, the moral savagery on display within The Last of Us is used to inform the narrative by highlighting the sheer level of desperation through the pathological fixation on survival expressed through gameplay. “The survivalist perspective makes it easier to justify Joel’s harsh and borderline psychotic actions. He’s a hardened, tough as nails guy that will stop at nothing to not only ensure his own survival, but the survival of the ones he loves” (Kwon 2013). The violent gamplay depicted within The Last of Us works in reducing the severity of ludonarrative dissonance because the actions performed by the player are germane to the environment. These ludic sequences are engaging while simultaneously acting in service to the narrative in a way that adds additional emotional weight whereas the disjointed violence in Bioshock Infinite: “…doesn’t serve [it]. It distracts from it” (Plante 2013).

By evaluating the ludonarrative shortcoming and achievements of both the Bioshock series and The Last of Us respectively, an improved understanding of the exact factors that contribute to conflict between ludic and narrative elements can be better understood. The varied attempts of these games to mitigate dissonance through gameplay motifs and narrative design and the relative effectiveness of these methods highlight the aspects of game design that can be implemented in order to bridge the cognitive gap between gameplay and narrative intent.